While the stories I email out on Thursdays are often heartwarming, this one is a somber reminder that our safety comes at a cost to the brave men and women who step up to protect us and our families.

Very early Sunday morning, a 30-year-old officer from the Albert Lea Police Department and two civilians were shot. Fortunately, the officer (whose name is still being withheld) has been released from the hospital and is expected to make a full recovery. Though both the civilians suffered more serious injuries, they are recovering as well.

At 2:18 AM, the Albert Lea Police Department responded to a 911 call about a noise complaint. The caller thought he heard either fireworks or gunshots, and according to Albert Lea’s director of public safety, the initial call was a “typical noise complaint” since reports of gunshots sometimes do turn out to be fireworks. When the officer arrived on the scene, the suspect fired on the officer. One shot went into the officer’s chest, and another two hit the squad car. The officer was wearing a vest when he was shot, and according to a statement from the Albert Lea Police Department, the officer got out of the line of fire, assessed their injuries, and drove themselves to the emergency room. 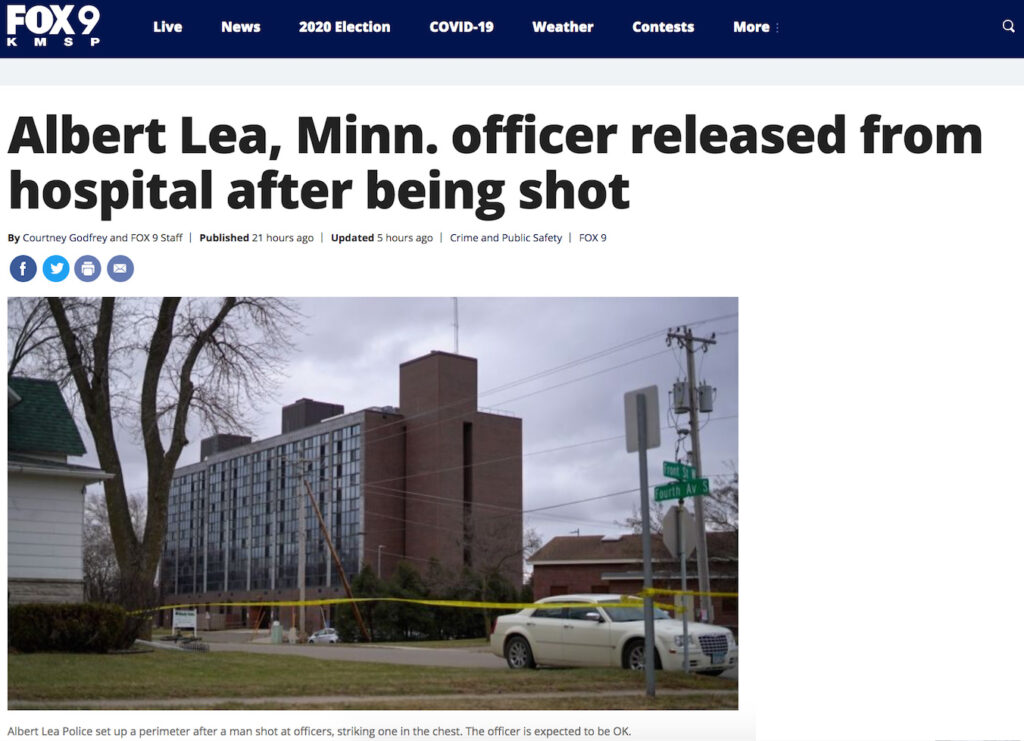 The 21-year-old suspect was identified and arrested on Sunday after a nine hour long standoff during which he barricaded himself inside an apartment and continued to fire. After being arrested, he admitted that he was the one who made the initial 911 call reporting the noise complaint. The Minnesota Bureau of Criminal Apprehension Force Investigating Unit is continuing to investigate the officer involved shooting, and the Homicide Unit is investigating the active shooter incident with the Albert Lea Police Department.

Law enforcement professionals like this officer who was shot in Albert Lea put their lives on the line for us at every hour of every day, and I for one am grateful for the unmeasurable sacrifices they make. Thank you to this officer, the entire Albert Lea police department and first responders, and the other law enforcement agencies who have stepped in to help in the aftermath. We appreciate your service and heroism.

P.S. –  If you have a #ThankACop story to share or an officer to highlight, please email us at info@emmerforcongress.com. We look forward to hearing from you!