A few weeks ago, we received another recommendation for our #ThankACop initiative, and I am excited to introduce you to this week’s officer: Carver County Sheriff’s Deputy Steve Dascher! We always enjoy hearing about the good work our law enforcement officers do, so you have an officer, chief, dispatcher, sheriff, or deputy who deserves to be thanked, please do not hesitate to reach out at [email protected]!

Deputy Steve Dascher has served Minnesota for the past eleven and half years, all of which have been with the Carver County Sheriff’s Department. After growing up on a farm in Renville County, he went to college and worked in the Metro for several years before returning to his family’s farm when his parents retired. 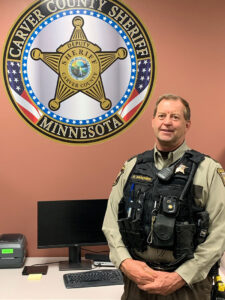 However, about fifteen years ago, he decided he wanted a new challenge and chose to return to school to earn a degree in law enforcement part time so that he could continue farming and raising his two daughters. Despite not having family members or close friends in law enforcement – besides one friend who formerly served as the Chief of Police in Buffalo Lake – he knew he wanted to serve his community in this way. His upstanding public service and outreach is the very reason why Deputy Dascher was recommended to us.

However, this is not the first time Deputy Dascher has been recognized. A few years ago, he received a life-saving award because of his response to a medical incident in Waconia. He remembers getting a fairly routine medical call, but this call turned out to be anything but routine. When officers respond to these types of calls, he said, they are usually there to assist the paramedics and provide a safe environment for the medical professionals to do their work. Officers also ensure that incidents reported as medical do not involve alcohol, drugs, or weapons and require criminal prosecution.

When Deputy Dascher arrived at the scene in Waconia and walked into the 911 caller’s house, he found that the man had suffered a heart attack between the time the call was placed and the time he arrived. Deputy Dascher immediately initiated life saving efforts and CPR, and fortunately Deputy Dascher was able to revive him. The man survived, got his health back, and is still with the community today. Deputy Dascher said that incidents like this are the type he remembers is grateful for.

In addition to medical calls, Deputy Dascher said that mental health calls are becoming more and more frequent in Carver County and across the state. Depending on the call and the type of information law enforcement officers receive, officers usually respond and perform quick evaluations even though they are not licensed mental health professionals. If there is any evidence that the person has harmed themselves or will do so, officers are bound by law to consider that person a danger to themselves and then have the right to transport them to a local hospital. Deputy Dascher said that his department has successfully put time and energy into responding to mental health calls because of their increased frequency.

Carver County deputies now complete critical incident training, and the Carver County Sheriff’s Department recently hired a crisis responder to assist with mental health calls. Carver County also employs crisis responders to help with these calls, and even though not all of these professionals are direct employees of the Sheriff’s Department, they work closely with the deputies and are significant assets to the team. Deputy Dascher said that he or a colleague will often accompany these professionals to the scene in order to ensure everyone’s safety. Deputy Dascher recalled arriving at addresses and discovering that his team had not arrived soon enough and the caller had taken the final step in taking their own life. Deputy Dascher said that incidents like this affect him deeply and will continue to for the rest of his life. These incidents are the most frustrating to him because despite training, it is impossible to understand what people are suffering when they have been diagnosed with a mental illness like depression, schizophrenia, or bipolar disorder. He believes we all have a responsibility to help people with mental illness in a direction where they can get help so our communities can avoid these tragedies.

When he is off-duty, Deputy Dascher coordinates an Adopt A Highway clean-up program along 212. Starting this week, he will coordinate with MN Department of Corrections agents to provide an opportunity for individuals under their supervision to complete required service in their own communities. Deputy Dascher also shares bike safety presentations for Tiger Scouts (the youngest Boy Scouts) in an effort to help the next generation understand that law enforcement officers are there to help and simply provide a chance for them to meet local officers.

Deputy Dascher also proposed an idea to publish a newspaper article to the local Chaska, Chanhassen, Victoria, Waconia, and Carver County papers a few years ago, and his first article became an ongoing series, “Ask A Deputy.” In this series, readers submit questions for deputies, and officers also have an opportunity to write about pertinent public safety topics, such as busing at the beginning of the school year or Halloween and trick-or-treating right now.

Regarding the nation’s current climate, Deputy Dascher said that there are individuals who are choosing to take advantage of the lawlessness and making officers’ jobs more difficult. However, he said that he has encountered a many people who show appreciation. He even said that people recently thanked him for his service after writing them a speeding ticket!

Deputy Dascher is concerned about the longevity of law enforcement. He mentioned that it is already challenging to recruit qualified officers and that applications are dropping. He also noted that the large majority of officers always try to do their best, even when they have to make decisions with a small amount of information or face public scrutiny.

Overall,  Deputy Dascher shared that he finds his work enjoyable and rewarding. Thank you, Deputy Dascher, and all sheriff’s deputies for the important work you do for your counties and communities!