Each year, the Minnesota Peace and Police Officer’s Association names an officer of the year. This year, St. Cloud’s Officer Ryan Priebe was recognized for his service to his community and for his actions on the night of June 14, 2020. Officer Priebe has served with the St. Cloud Police Department for 14 years. His work in St. Cloud’s South Side neighborhood and work with the Community OutPost (COP) House were noted as well. 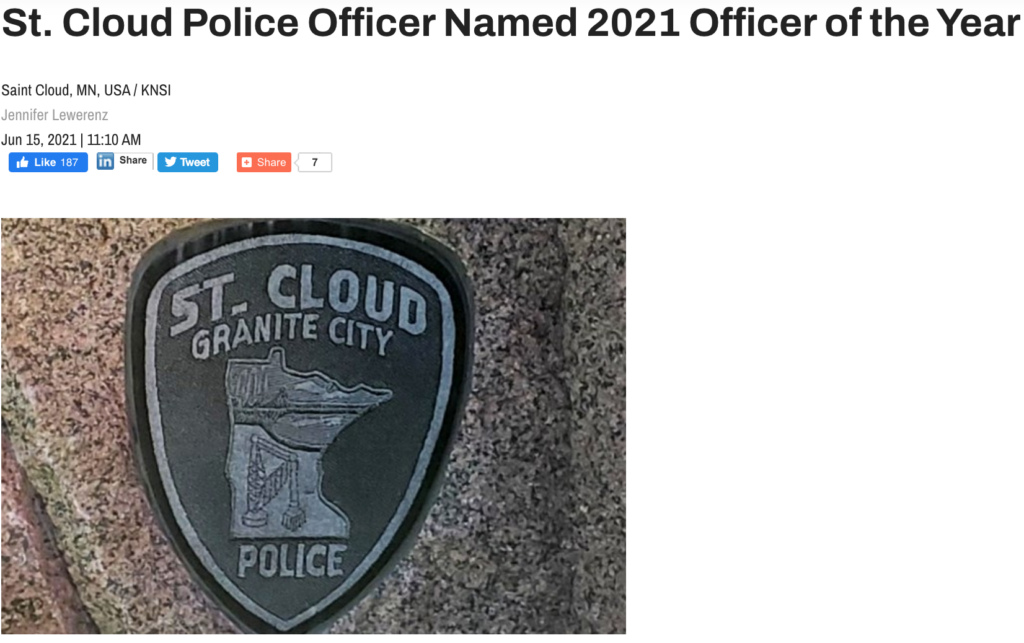 The incident last year began when he was monitoring social media as part of his duties with the (COP) House. He saw a video of a man carrying a handgun at a nearby gas station, and after formulating a plan, Office Priebe drove to the gas station with two other officers. The suspect attempted to run away, and Officer Priebe deployed his taser twice. An altercation with the suspect ended with Officer Priebe being shot in the hand. His two partners then took the suspect into custody.

Since then, Officer Priebe has had three surgeries to attempt to repair his right hand. He did go back to full time duty in January, but due to additional complications with his injuries, he is now on light duty and waiting for his hand to completely heal.

Officer Priebe has nothing but good things to say about St. Cloud and his department despite what he has been through: “They stood side by side with me and my family supporting us. The city, the mayor, they’ve all supported us through this entire thing so the support that we’ve gotten from my partners, the administration here, the chief, the city in general has just truly been amazing, which is what you know drives me to come back and and serve them and do what we do.”

Thank you for your service and sacrifices, Officer Ryan Preibe. You have our full support as you continue to recover and protect St. Cloud’s community.