Category: In The News

Otsego, MN – Today, Congressman Tom Emmer (MN-06) announced that he has been endorsed by the National Right To Life Committee (NRLC).

“I am grateful to receive the official endorsement from the National Right to Life Committee,” said Congressman Emmer. “As a father of seven, I am a proud supporter of life. I will continue to support legislation that protects life and to be a voice for the voiceless for as long as I serve in Congress.”

Founded in 1968, National Right to Life is the nation’s oldest and largest grassroots pro-life organization. Recognized as the flagship of the pro-life movement, NRLC works through legislation and education to protect innocent human life from abortion, infanticide, assisted suicide and euthanasia.

“We strongly commend Congressman Emmer for his perfect 100 percent pro-life voting record in the 115th Congress,” stated Karen Cross, political director for the Committee.  “Voters who are concerned with the right to life and with the protection of the most vulnerable members of the human family should vote to return him to Congress.”

In addition to the NRLC endorsement, Emmer has also been endorsed by the Sixth District Republican Party of Minnesota, the U.S. Chamber of Commerce, the Minnesota Police and Peace Officers Association, and the National Federation of Independent Business.

Judge Kavanaugh has served 12 years on the U.S. Court of Appeals for the District of Columbia, one of the most prestigious courts in the nation as it oversees many of our top federal agencies. By comparison, Antonin Scalia was on the D.C. Circuit for only four years when he was nominated for the Supreme Court. Judge Kavanaugh has issued more than 300 opinions, 11 of which have been affirmed by the High Court, and clerked for the very man he has been nominated to replace, Justice Kennedy, on the Supreme Court.

Without a doubt, Judge Kavanaugh is extremely well-qualified for this position and should be confirmed by the U.S. Senate.

END_OF_DOCUMENT_TOKEN_TO_BE_REPLACED 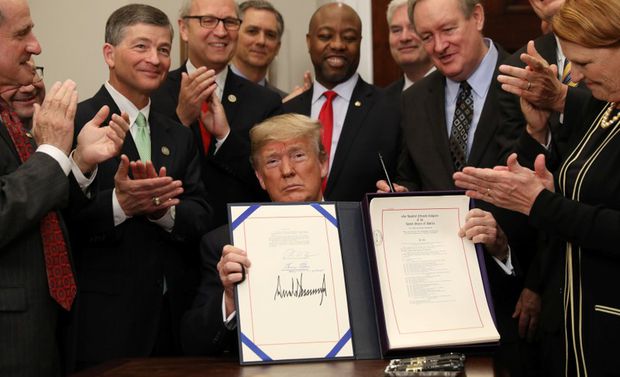 Yesterday, the U.S. House sent the largest pro-growth, deregulation bill in decades to President Trump’s desk. Today, I was fortunate to be at the White House and watch as he signed it into law.  S. 2155, the Economic Growth, Regulatory Relief and Consumer Protection Act will roll back some of Dodd-Frank’s most harmful regulations to small financial banks and credit unions.

The bottom line: Dodd-Frank did not work. Both chambers (and both sides of the aisle) agree that the “one size fits all” regulation style from Washington has done little but destroy economic potential and left Main Street – quite literally – to pay the price for a crisis for which they were not responsible.