“I am proud to endorse Pete Stauber in his campaign to be our next Congressman from Minnesota’s Eighth District. Pete is a born and raised Minnesotan who has dedicated his life to public service and his community. A former police officer, current county commissioner and father of five, Pete truly understands what Northern Minnesota families need and is ready to deliver.

“Pete was recently named one of the NRCC’s ‘On the Radar’ Young Gun candidates, proving he is a formidable opponent capable of winning his campaign. I am honored to support Pete Stauber in his 2018 campaign and look forward to serving with him in Congress on behalf of the great state of Minnesota.” 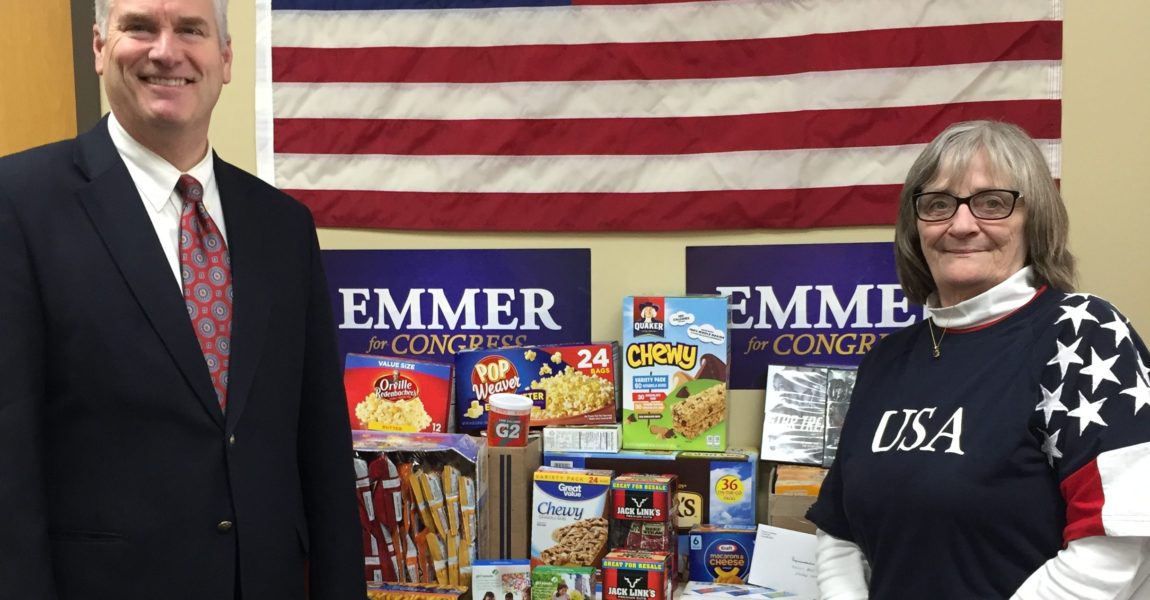 “Our community is fortunate to have someone like Becky willing to serve those who serve all of us,” said Congressman Emmer. “On behalf of all who donated, we’re glad we could contribute in some small way.”

In thanking the Congressman for organizing the collection drive and raising awareness of the demands placed upon deployed military, Carlson said, “you touched a lot of hearts today.”

Becky’s Troop Care Packages is a non-profit organization that sends monthly care packages to troops deployed to foreign nations as part of their service to our country.  She includes a hand written note with every package to express gratitude for their sacrifice and have been sending monthly packages for over 14 years.  In July 2014, Carlson received the “Eleven Who Care” Award from Kare 11.

“I am honored to have been chosen to serve as Deputy Chair under our new leader, Chairman Steve Stivers,” said Emmer. “Election Day 2016 was a huge success, and I am excited to be part of this team as we work toward an even more victorious 2018! This incredible team of members and I share a commitment to representing all Americans here in Congress, and we will ensure the next class of Republicans do as well.”

“Since joining Congress, Congressman Emmer has spent tireless hours assisting his colleagues, Republican candidates and the party as a whole,” said Chairman Stivers. “Not only did Emmer work to ensure we maintained our Republican seats in Minnesota, but he stepped up to help and lend advice to candidates across the country. Emmer is a true team player who played an integral role in our successful November 8th, and I am looking forward to working with him and the rest of the NRCC leadership team to build on our recent success.”

Over the years Emmer has consistently worked to elect Republican candidates up and down the ticket, both in Minnesota and across the country. For the 2016 election, Emmer was appointed as NRCC Freshman Liaison as well as Deputy to Majority Leader Kevin McCarthy for the Young Guns program.  Since November, Emmer has helped newly elected members transition into Congress.

“Today, an incredible number of Americans showed up to the polls to cast their ballots in the 2016 general election. I am humbled and honored to have earned the vote of confidence by the great people of Minnesota’s Sixth Congressional District. We had an extremely productive first term, and I look forward to continuing our efforts of reining in wasteful spending, reducing regulations affecting our daily lives and working to ensure the safety of all Americans. I am grateful for this opportunity and will not take it for granted.”

A Statement from Tom Emmer on the Primary Win

Minnesotans across the Sixth District went to the polls and cast their ballot in today’s primary. I am extremely honored to have received their vote of confidence and am looking forward to talking to voters about our shared Midwest values through the general election in November.